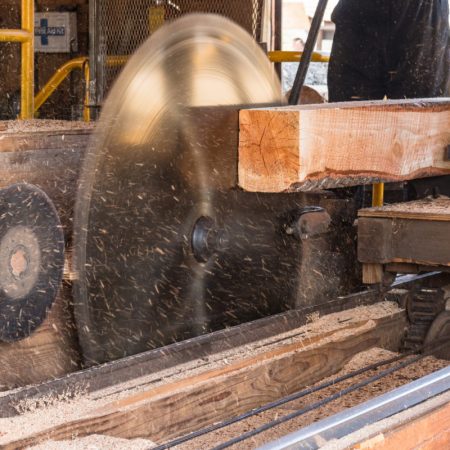 I’ve got to say Hamar Laser’s L-743 [Ultra-Precision Triple Scan® Laser] is a fantastic tool. It’s fast, it’s accurate. It’s very portable. To do the same amount of three-axis work as the L-743, I’d have to carry three optical scopes with me, which is just not possible.

I started SawPro in 1996 after working in a couple of local sawmills for about 20 years. My work included developing the first variable-tooth pitch and depth band saw blades in our industry in the early ’90s. Today SawPro specializes in developing and training saw filing staff and troubleshooting sawing issues, and we analyze, repair and align machine centers to maximize productivity for customers on four continents and across the U.S.

Always looking to improve efficiency, I began looking into lasers. Because of errors from dust and heat that I saw in some lasers, I shied away from using them until I ran across a Hamar in the field. A service outfit with an L-743 and I were both hired to do similar jobs in the same sawmill, and this let me compare the laser with my Brunson [76-RH Telescopic Transit Square].

The tech with the Hamar L-743 was shooting the feed system and I was shooting the supporting band mill and aligning the band mills and guides. I was really impressed with the incredible accuracy he was getting and that his measurements were very repeatable. What also impressed me was that the L-743 measured in three axes, whereas I had to move my Brunson from one axis to another and buck-in again.

To me, Hamar’s L-743 was like three alignment tools in one and I didn’t have to move out of position at any time. Therefore, the laser was easily three times faster, if not more, than the optical equipment I had been very satisfied with, and so I switched to the L-743. That was many years ago and I’ve had really great success with it ever since.

Recently, I did a head-rig track alignment job for a large sawmill. We had to break 60 feet of track loose, with both flat and “V” rails. This would’ve taken three days with the Brunson but the Hamar let me run two teams. We were within .005 inch in 60 feet, in plumb, level and straight, and were done in only a day and a half. The sawmill, which had struggled with the machine center for a year and a half, almost doubled production. Like many jobs I’ve done with the L-743, this one turned out just fantastic.